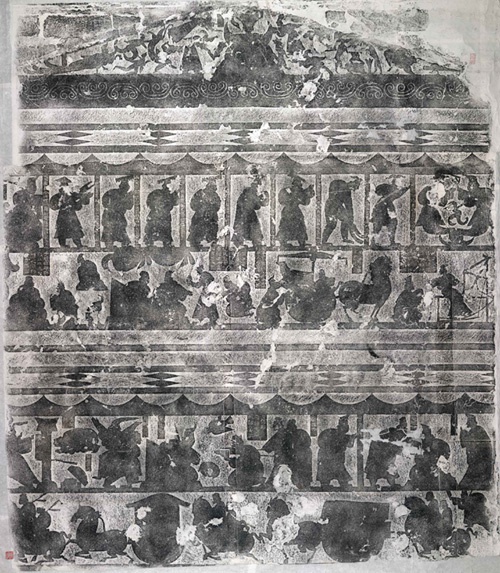 The scene is divided into five registers: The first register (triangular gable) shows the Queen Mother of the West sitting in the middle, accompanied by winged immortals, sacred beasts, and hares grinding the elixir of immortality in a mortar. The second register (from right to left) portrays the legendary Sovereigns of ancient times, starting with Fuhsi with his female counterpart, Nüwa, and followed by Chujong, Shênnung, Huangti, Chuanhsü, K’u, Yao, Shun, Yü, and Chieh. The third register (from left to right) illustrates stories of filial piety, starting with Ting Lan, Laitzu, Min Tzuch’ien, and Tsêngtzu’s mother dropping her weaving shuttle. The fourth register (from left to right) illustrates stories of Ching K’ê’s attempt to assassinate the King of Ch’in, Chuan Chu assassinating the King of Wu, and Ts’ao Mei seizing Duke Huan of Ch’i. The fifth register illustrates a procession of chariots, horsemen, and footmen.