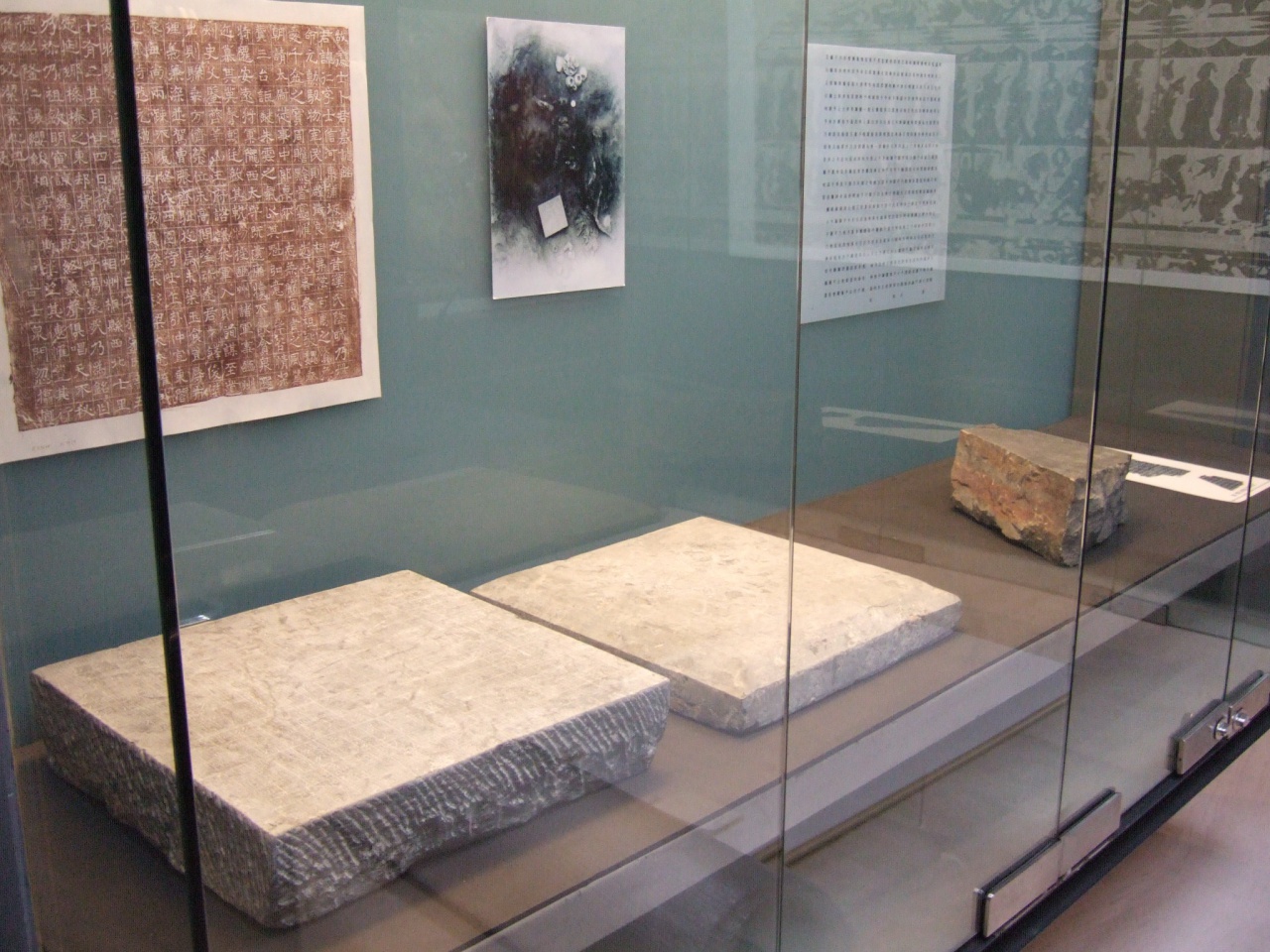 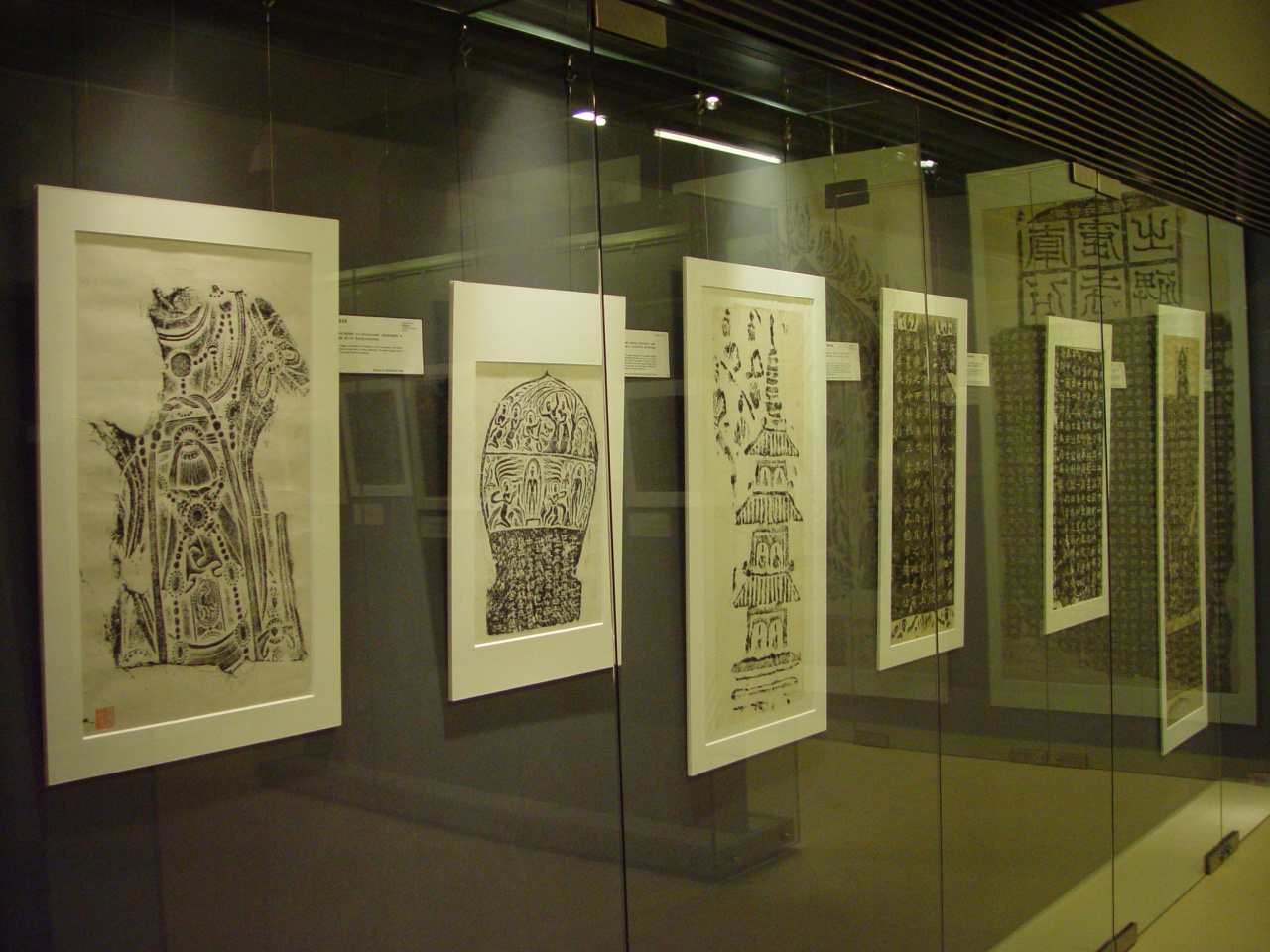 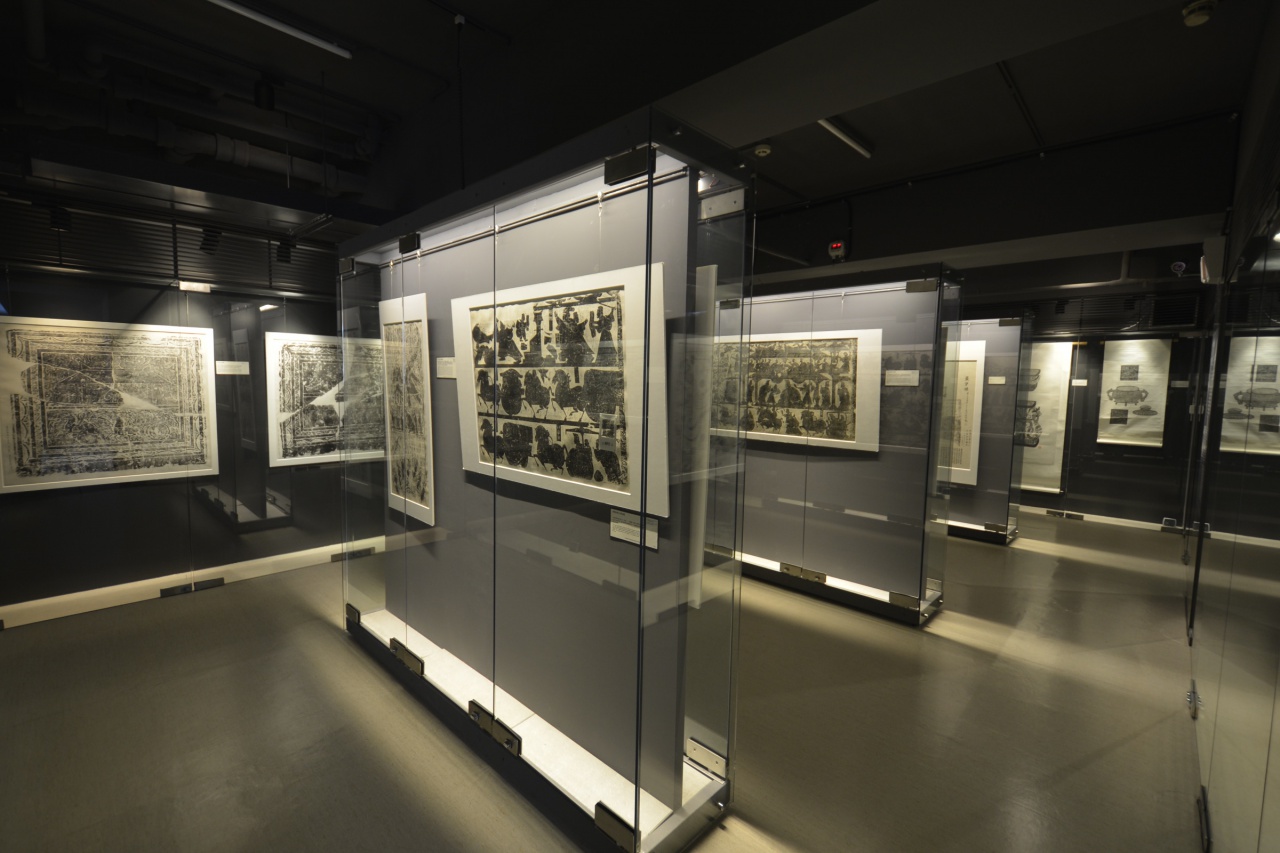 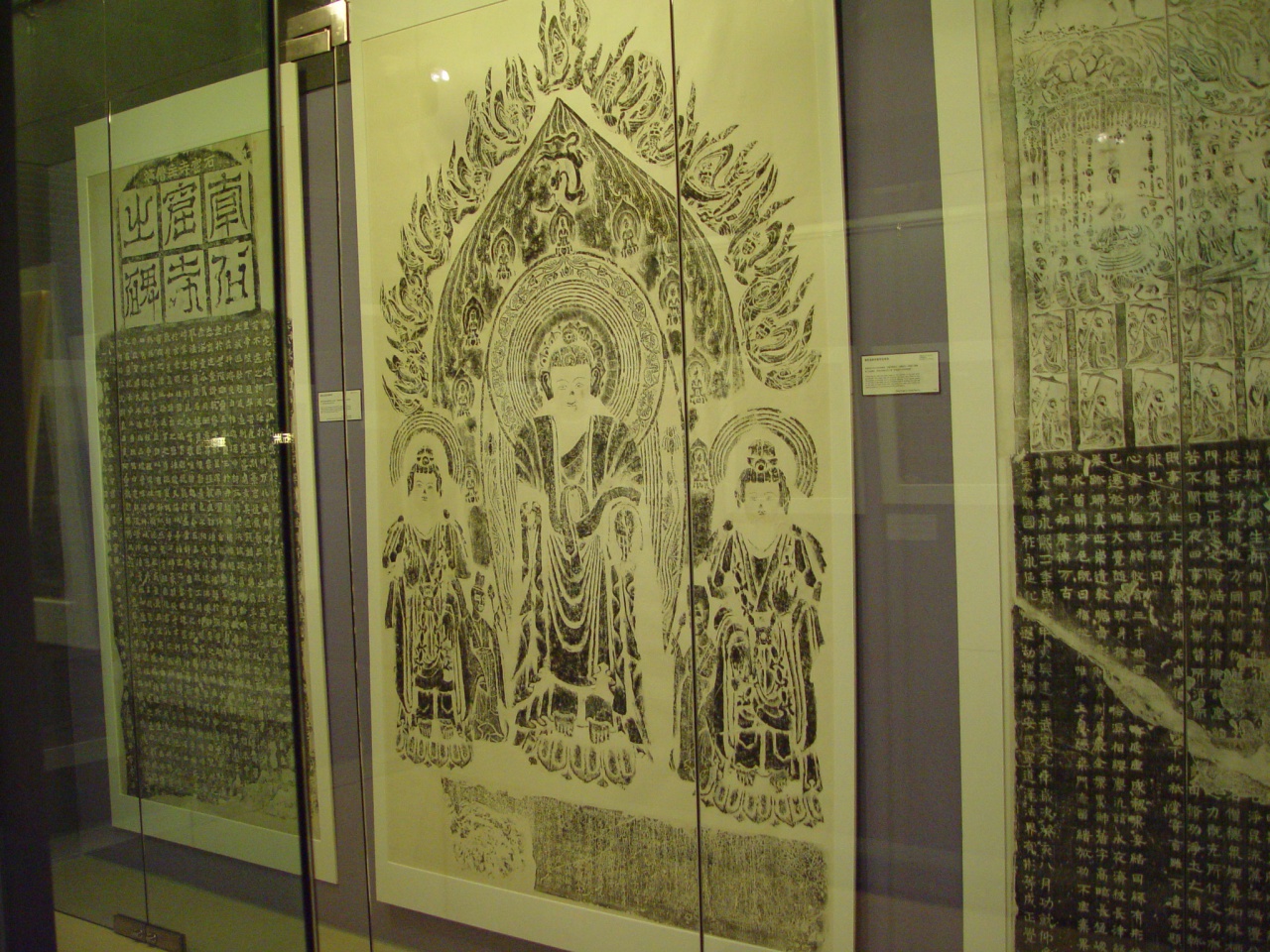 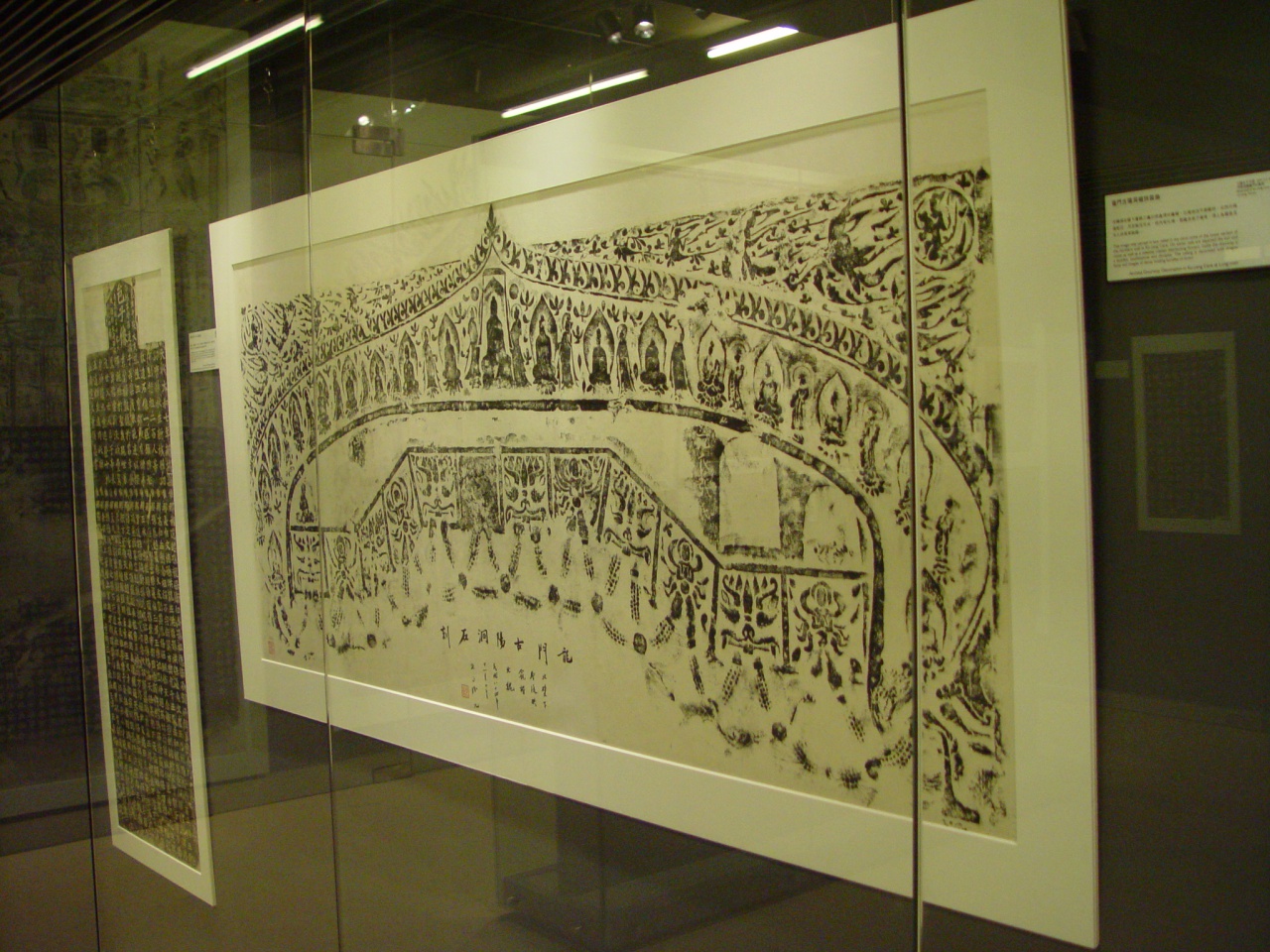 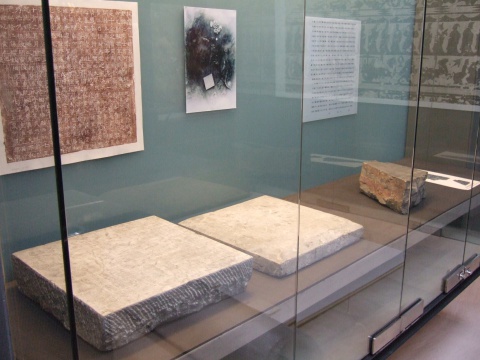 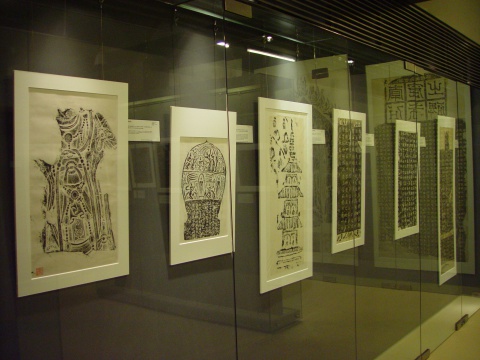 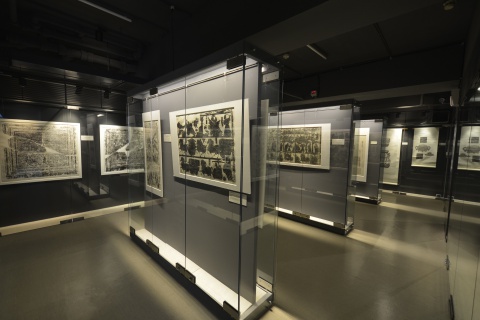 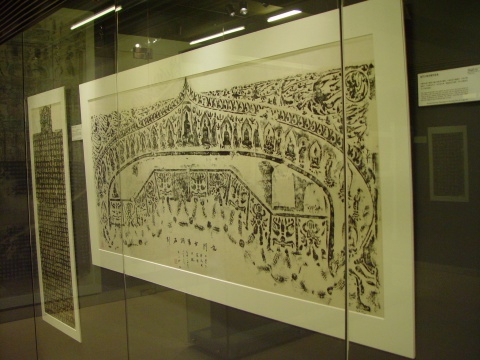 The Institute has approximately 40,000 rubbings of more than 28,000 bronze and stone items. Except for a few donations, most of these were purchased in the early 1920s. Among the Institute’s collection, many rubbings are not recorded in other sources; some of them were made at an early date or are of exceptional quality. Four themes are exhibited: “Full-surface Rubbings of Bronze Artifacts”chosen because of the fine technique of the rubbing, or because the typology of the original bronzes is not recorded in catalogues, or because of earlier scholars' writings on them. “Han Dynasty Rubbings” includes rubbings of illustrated carvings, bricks and tomb murals. “Buddhist Statues” presents mainly rubbings of Buddhist statues and other stone tablets in the Northern Wei dynasty (386-534); they express the characteristics of Buddhist belief at that time. “Funerary Inscriptions of the T’ang and Sung” shows the evolution of distinctive Chinese funerary culture during the T’ang and Sung periods (618-1127).
TANG & SUNG DYNASTY EPITAPHS
Epitaph tablets began to appear in China during the second century, and became widespread during the seventh to tenth centuries . From the perspective of comparative world history, the epitaph has two unique features : 1. It is a private document used as a burial item and thus at times carries religious significance; 2. It is the comprehensive biography of the owner of the tomb and thus often contains accurate historical data. An epitaph is usually a few hundred to one thousand characters long and has many themes.

There were two important changes in the development of the Tang dynasty (618-907) epitaphs. First, around the turn of the ninth century, their style changed from the so-called parallel prose to a simple, direct prose style. This change reflected the impact of a literary revolution, led by the prominent T'ang literati Han Yü Second, authors of the epitaphs normally were confined to the relatives and friends of the family of the deceased. But from this time onwards some families asked celebrities, especially men of letters, to write for them instead. Because of this development, potential readers of the epitaphs expanded to the general public-- epitaphs were no longer private documents. After the development of printing during the Sung dynasty (960-1279), epitaphs composed by celebrities were even more widely circulated.

The Sung epitaphs on display highlight several special features of Sung epitaphs in general: 1. They were widely used by commoners; 2. They contain a lot of data on women; 3. They include a lot of data on the family; 4. They reflect social mobility; and 5. They record phenomena particular to the Sung, such as the disturbances between the Northern (960-1127) and the Southern Sung (1127-1279), family structures reflecting the enormous poplulation growth, the attempts of merchant families to enter officialdom, and widows' choices of remarriage or chastity.

Recent archaeological research proves that epitaphs were usually placed near the coffin, sealed in tomb chambers or tomb pits. The tomb of Li Ching-hsün (600-608) is a typical example of chamber tombs. The tomb of Pu Jen (?-603), discovered during the Anyang excavations by the Institute, is an example of pit tombs. 1  /  1
​FULL-SURFACE BRONZE RUBBINGS
"Full-surface rubbing" refers to the rubbing of complete contours of vessels, and was an important technique in transmitting the entire shape of vessels before the advent of photography. Extant examples are mainly rubbings of bronzes. This kind of rubbing technique probably appeared only after the Ch'ien-lung (1736-1795) and Chia-ch'ing (1796-1820) eras.

The technique of full-surface rubbing involves making paper ink-rubbings of vessels and at the same time utilizing skills of painting, pasting, rubbing, and paper-cutting. Rubbings can either be done with a single sheet of paper or be done piecemeal on the vessel and then pieced together. Because full-surface rubbing is a difficult technique, extant works are very rare.chosen because of their fine techniques, or because the typology of the original bronzes is not recorded in catalogues, or because the earlier scholars' manuscripts on them. Typology is an important criterion for dating the vessels, while inscriptions provide key first-hand source material. References by earlier scholars often shed light on the origin and transmission of the vessels, as well as the deciphering of their inscriptions. Al1 are important reference materials for researchers. The exquisite rubbings and the calligraphy of earlier scholars are also valuable for their aesthetic qualities. 1  /  1
HAN PICTORIAL RELIEFS
During the Han dynasty (206 B.C.-220 A.D.), tombs and shrines were often decorated with carvings and murals. These carvings and murals depict beliefs and life styles, including representations of ghosts and spirits, strange beasts, auspicious images, human figures, buildings, vehicles, historical anecdotes, and scenes of hunting, farming, animal husbandry and entertainment. Rubbings made from these carvings are important source materials for the understanding of the social and cultural history of the Han.

The collection of Han dynasty rubbings at the Institute includes more than one thousand four hundred pieces obtained in Shantung, Honan, Szechwan, Kiangsu and other provinces. Most were purchased in the early 1930s. A small number were private donations or made in situ from the originals by members of the Institute during their field investigations.

Few are aware of the existence of this collection, and a considerable number of the rubbings have not yet been published. Some rubbings are very old, or of exceptional quality. They are of great value in scholarly research. 1  /  1
BUDDHIST STATUARY STELES
Buddhism was a pivotal force in Chinese culture during the medieval period. Monks, nuns, laypeople, nobility and commoners all engaged in making Buddhist images, and Buddhist images from the period reveal tremendous diversity. The Institute's collection contains a large number of rubbings made from Buddhist images, the focus being on Buddhist steles and Buddhist cave sites of the Northern Wei (386-533).

The stone stupa image made by Pao Ts'uan (422 A.D.) and the "Record of the Buddha Image of Sakyamuni" by Sung Te-hsing (457 A.D.) reveal the importance at this early period of the making of stupas and the biography of Sakyamuni Buddha in devotional practices. The inscriptions on the large stele with Buddhist images made by Chang Pao-chu in 525 A.D., and the one made by Hui-hsün and Hui-kang in 543 A.D. represent the way in which Mahayana Buddhism amalgamated the doctrines of various scriptures.

Yün-kang and Lung-men are representative Buddhist cave sites of the Northern Wei period. The caves at Yün-kang, containing very few inscriptions, are distinguished by high-relief ornamental carving, while Lung-men is marked by a wealth of inscriptions and low-relief decoration. The six inscriptions from the Ku-yang Cave displayed here are all listed among the "twenty outstanding pieces of calligraphy at Lung-men." Among these, the calligraphy of the inscription for the image made by the monk Hui-ch'eng is considered the finest. When the regional Inspector of Ching-yang, Hsi K'ang-sheng, established a northern and southern cave monastery in the early sixth century, he had a stele erected to commemorate the event. The inscription on the stele discusses in detail the relationship between meditation and Buddhist doctrine. 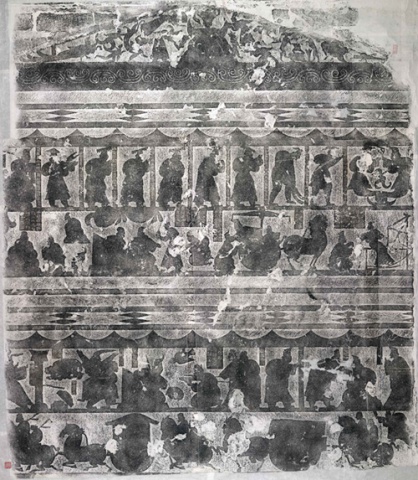