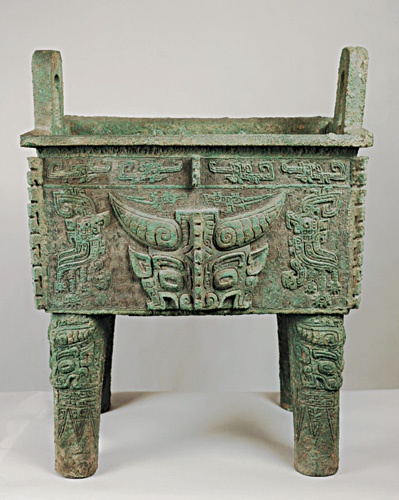 This bronze ox cauldron is the largest and heaviest bronze ever found in the archaeological excavations carried out by the Institute at Anyang. It was unearthed at the northern end of the southern corridor of the Royal Tomb M1004, placed together with the bronze deer cauldron. The main decoration on each of the four sides is an ox head in relief. On the two wider sides, there is a standing phoenix on each side of the ox head. On the two narrower sides appear one dragon and one bird on each side of the ox head. There is a band of k'uei-dragon patterns on the upper portion of the vessel. The four legs of the square cauldron are also decorated with ox heads. A pictograph character for niu (ox) is cast on the inner bottom of the vessel.