In 1930, Chinese and Swedish scholars of the Sino-Swedish Scientific Expedition investigated Han beacon structures along the Edsen-gol River in Kansu Province. On April 28th of that year, a team member, Swedish archaeologist Folke Bergman, discovered 346 pieces of wooden slips at Han fortress P9 at Boro-tsonch (which in Mongolian means "ash mound") in the lower reaches of the Edsen-gol River. Following this discovery, more than 10,000 Han wooden slips were found at sites such as A8 Mu-durbeljin, A32 Limes Gate, A33 Ulan-durbeljin, and A35 Taralingin-durbeljin. Since this region belonged to the District of Chü-yen or Chien-shui of Chang-yeh Commandery during the Han dynasty, the excavated wooden slips are referred to as "Han Chü-yen wooden slips."

These slips provide a rich new source of information for the study of Han dynasty history. They vividly reflect aspects of the military and legal systems, educational practices, economy, beliefs and everyday life of local military personnel and civilians from approximately the mid-Western Han to the early Eastern Han. 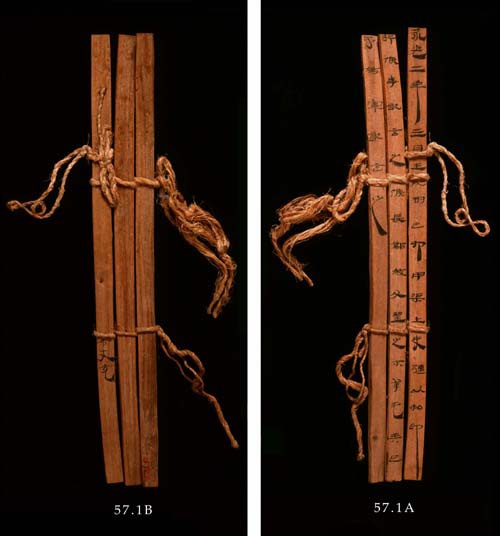 In the second year of the era Yung Kuang (42 B.C.) an officer of Chia-ch’u company reported to his superiors about the granting of leave of absence to Cheng She on grounds of the death of his father. This scroll was found largely intact including the connecting strings.