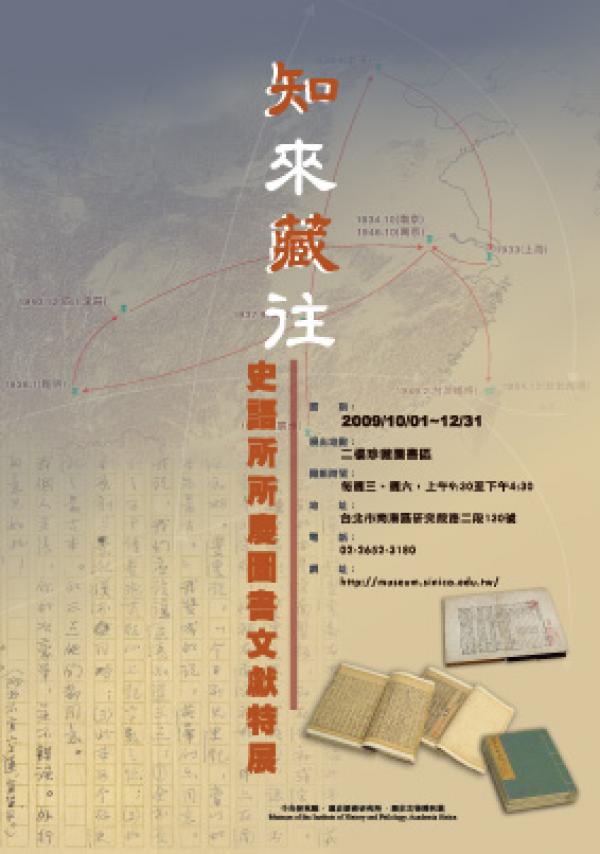 Since its founding in 1928, the institute of History and Philology has been committed to the collection of all kinds of valuable historical materials. Despite the trials of nine relocations during wartime, research and survey work has never been interrupted, and a myriad of difficulties have been overcome in order to expand the collection. Eighty-one short years later, the institute and its work can justly be called the apotheosis of modern scholarship. In order to celebrate its anniversary, we are pleased to present a special exhibition of books, documents, and other materials related to the history of the institute. Through the exhibition of various important pieces in the institute’s collection, we hope to both memorialize the hard-won achievements of the founders and to encourage the continued diligence of the current staff. The exhibit is divided into several sections:

Sung Dynasty Block Print Editions
When the Institute of History and Philology was first established, an “Outline for Library Preparation” was drawn up, and ancient Chinese books were widely sought. The works displayed in this exhibition—the Fu Ssu-nien Library’s three treasures (Sung dynasty editions of Shih-chi, Nan-hua chên-ching, and Wên-yüan ying-hua) and the works of the three Li’s, which were formerly stored at Ch’ün-pi-lou (Sung dynasty editions of P’i-sha-chi, Ch’ün-yü-chi and Pi-yün-chi)—are the only extant copies of these editions in the entire world. In them one can truly appreciate the artistry of the Sung dynasty bookmakers and the exquisite seals belonging to generations of book collectors. This collection is extremely valuable, and IHP’s purchase of the editions within this collection at a time when its budget was limited represented great “boldness” on the part of the institute. These editions are accompanied in exhibition by related archive files and documents, which not only record the process of the collection of these works, but also trace their respective paths through history.

Files and Archives from the Establishment of IHP
Since the institute’s establishment in 1928, research fellows have conscientiously preserved various archives and documents related to their work. For this exhibition, several representative documents and photographs have been chosen to create a retrospective of IHP’s establishment, development, and grueling relocations. One can know much by way of the “objectives of the IHP” and its organizational structure, including Fu Ssu-nien, the founding director, and other early scholars’ understanding of history and historical materials, as well as the method in which they planned the general direction of their research. Finally, letters written by important scholars are on display, in order to understand the achievements made possible by the discovery of new historical materials.

Classic Manuscript Scrolls
The finding of the scrolls from Tun-huang represent one of the four great discoveries in the history of modern Chinese diplomatics. The holdings of the Fu Ssu-nien Library include forty-nine scrolls in the Chinese, Tibetan, Western Hsia, and Uighur languages. Among these scrolls, some come from Li Shêng-to’s old collection, while others were purchased by Hsiang Ta when he was the head of the Northwestern China Expedition Team. For the exhibit, several manuscript scrolls have been chosen from the periods of the Six-Dynasties and the T’ang dynasty, along with scholars’ letters concerning their basic research. In this way, the viewer can gain some understanding of the difficulties faced by researchers of these documents.

Rare Book Collection from the Toho Bunka Jigyou Soukai
In 1925, Japan used the money from the Boxer Indemnity to establish Toho Bunka Jigyou Soukai (the Oriental Cultural Enterprise Association) in Peking and invited Chinese scholars and Japanese sinologists to work on the extension and revision of the Ssu-k’u ch’üan-shu. This project included the collection and purchase of over 27,000 works (approximately 140,000 volumes), including some from the period of Ch’ien-lung’s reign originally left out of the Ssu-k’u ch’üan-shu as well as works created from the end of Ch’ien-lung’s reign into the late Ch’ing dynasty. After China’s victory in the Second Sino-Japanese War, this collection was taken over by the Institute of History and Philology. Chang Chêng-lang then selected more than 10,000 volumes not in the collection of the Nanking main headquarters, including priceless block print, manuscript, and draft editions, some of which are marked with editors’ brushes. The original documents are displayed.