These characters, carved on mountain rock, exhibit different sizes and styles. The vertical strokes in certain characters such as ming and sheng are especially long, a rare trait in the clerical-style characters of the Han dynasty. These characters are in fact described as a clerical-style that approaches running script. One critic remarked, "because of their strong and forceful energy, the timid do not dare to imitate them and the weak cannot reproduce them." The original stone is now kept at the Han-chung City Museum in Shensi Province. 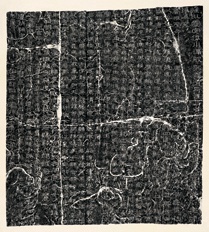