As stipulated in the Rites of Zhou, the Son of Heaven should “reach out to the people by means of grand ceremonies.” According to imperial tradition, grand ceremonies associated with the emperor would involve imperial audience, banquet, title conferral, and classics colloquium. Ceremonies opened to commoners would include wine-drinking rites in provinces. Of all the yearly celebrations, the most important were the “Three Imperial Festivals,” namely, the New Year Imperial Audience, Winter Solstice Sacrifice to Heaven, and the Emperor’s Birthday.

The Qing court would host a banquet in various venues when there was a festival or suitable occasion. To celebrate the Three Imperial Festivals, the emperor would host a banquet at the Hall of Supreme Harmony (Taihe Dian) after receiving the guests’ homage. The idea was to allow imperial clans, key officials, and envoys from tributary states to enjoy festive occasions with the emperor.

Structurally, the Hall of Supreme Harmony was built with eleven by five bays. Compared with other Chinese palaces in the past, the Hall was undoubtedly the most magnificent single structure. In the eighth year of the Kangxi reign (1669), renovation of the Hall and the Palace of Heavenly Purity (Qianqing Gong) was completed. The two structures were then viewed as the two jewels of palace architecture in the entire Forbidden City. The “grandeur” of palaces, as the Emperor Kangxi specifically pointed out in one of his mandates, was intended as an “embodiment” of the imperial reign.

The Hall of Supreme Harmony was not only the venue for reception and banquet during the Three Imperial Festivals. But also the venue for events such as the Empress’s investiture and the Ceremony of Chuanlu (honorary roll call of successful candidates), where top scorers of the Palace Examination (both civil and military) were given an honorary roll call. Traditionally, the emperor must entitle an empress to manage the royal household and set a motherly example for the entire empire. If the emperor was enthroned at a very young age, his imperial wedding would generally take place one day before he officially took over the reign of the government. As for civil service examinations, they would involve aspiring scholars partaking in a triennial sequence of pre-Palace Examinations held at prefectural or provincial levels, jointly known as the period of Dabi. The final round, officially known as the Palace Examination, was presided over by the emperor, who would screen out top scorers in the order of excellence. The names of the selected would then be read out loud in the Hall of Supreme Harmony and inscribed on the Golden placard.

This special exhibition showcases archived Grand Secretariat documents housed at the Institute of History and Philology (IHP). The documents in question are divided into the Grand Banquets, the Great Festivals, the Imperial Weddings, and the Imperial Examinations to demonstrate the system of rites and actual practices pertaining to grand imperial celebrations.
The Grand Banquets
In the Forbidden City, the Hall of Supreme Harmony was the most important domain for the emperor to exercise and demonstrate his supreme sovereignty. It was in the venue that national ceremonies such as the imperial audience, annual festivals, enthronement, the empress consort’s investiture, and the Ceremony of Chuanlu (honorary roll call of successful candidates) were held.

According to the system of rites, the emperor was to preside at the Hall of Supreme Harmony during the Three Imperial Festivals to receive homage from his subjects and subsequently hold banquets. The banqueting space of the Hall comprised the interior and the entire front courtyard. The courtyard stretched from the facade of the Hall to the Gate of Supreme Harmony, covering three hectares.

The guests’ official ranks and social status dictated the seating order at the Grand Banquet. Imperial clans, high-ranking officials, and tributary noblemen were seated inside the Hall, and staffers from the Censorate (Ducha Yuan) and the Court of Colonial Affairs (Lifan Yuan) were placed on the two flanks. High-ranking hereditary noblemen and imperial guards sat on the elevated terrace in front of the Hall. Officials lower than the third rank would assemble in the courtyard, and foreign envoys would be placed on the periphery. The seating arrangement was intended to create a symmetric body of guests paying tribute and toasting to the Son of Heaven seated on the throne. This top-down, descending closeness of relationships in the seating order demonstrated not only the imperial reign’s political hierarchy and ethics of ranking but also the universal order carefully manicured through the lens of the Qing empire.
The Grand Festivals
In the eighth year of the Shunzhi reign (1651), the government officially designated the New Year’s Day, Winter Solstice, and the Emperor’s Birthday as the three major yearly festivals. On these occasions, the imperial clans and the Grand Secretaries would lead government officials to pay tribute to the emperor, who would then host a grand banquet at the Hall of Supreme Harmony. Simultaneously, local government officials would set up an incense altar facing towards the imperial capital and undertake the ceremony of three kneeling and nine kowtows to pledge allegiance from afar. Dignitaries in the capital, generals stationed in outposts, and envoys from Joseon, Annam, and the Ryuku Kingdom would pay tribute to the emperor by submitting their memorials. Of all the submitted memorials, those categorized as biao were destined for the emperor and the empress dowager, and those categorized as jian were destined for the empress. The Grand Secretariat was responsible for creating memorial templates, and local officials would submit routine memorials.

According to the regulations, a grand banquet should be held at the Hall of Supreme Harmony during the Three Imperial Festivals where an imperial audience was assembled to pay homage to the emperor. In practice, though, imperial audience was assembled primarily on the New Year’s Day but less frequently on the day following the Winter Solstice Sacrifice to Heaven. Banquets were often cancelled due to smallpox pandemic or ominous movements of heavenly bodies. Of all the Three Imperial Festivals in the Qing dynasty, those held at the Hall of Supreme Harmony were extremely rare. As of the fifteenth year of the reign of Qianlong Emperor (1750), the Emperor’s Birthday was beginning to be celebrated decennially on New Year’s Day at the Hall of Supreme Harmony. Throughout the Qing dynasty, there were merely 48 banquets held at the Hall of Supreme Harmony for the Three Imperial Festivals.
The Imperial Weddings
The wedding ceremony of the Son of Heaven was billed as Imperial Wedding. If the emperor had already been married before being enthroned, an investiture ceremony would then be held immediately after the enthronement. During the ceremony, the princess-consort would be installed as the empress consort. In the early days following the Qing conquest of China, namely during the reigns of the Shunzhi and Kangxi Emperors, imperial weddings were held for the early-enthroned emperors when they came of age. It was also the case for the last three Qing emperors, i.e. Tongzhi, Guangxu, and Xuantong, who were enthroned when they were fairly young. Granted that the young emperor had the final say, the selection of consorts and empress was more possibly the result of contest and negotiation between the empress dowager, the great consorts, and chief officials. Generally, the emperor would assume his personal rule after the imperial wedding, marking the official start of his supreme sovereignty.
The Imperial Examinations
Although the Qing dynasty drew on a variety of human resources, the civil service examinations remained the most esteemed and legitimate way of climbing the social ladder. A young scholar hoping to land a governmental post should begin by taking the lowest-level examination to obtain the status of Cultivated Talent (xiucai). Having become a xiucai with high marks meant being academically qualified for sitting in the triennial Provincial Examinations. This qualification placed one as the peer of Government Students (shengyuan). Those having passed the Provincial Examinations became a licentiate member of Provincial Graduate (juren), and were eligible to apply for candidature with the Ministry of Rites in the Metropolitan Examination held at the capital. Successful candidates of the Metropolitan Examination were called gongshi, who were eligible for sitting at the Palace Examination presided over by the emperor. The emperor would then list the candidates in the order of the Three Categories (sanjia). Those categorized in the First Category (yijia) were conferred the title of Metropolitan Graduate with Honors (jinshi jidi), and those in the Second and the Third Categories were conferred the title of Regular Metropolitan Graduate (jinshi chushen) and Associate Metropolitan Graduate (tong jinshi chushen) respectively. The candidate standing first in the First Category was called the Principal Graduate (zhuangyuan), followed by the Second Graduate (bangyen) and the Third Graduate (tanhua).

The civil service examinations were an elaborate process for recruitment of talents. The Provincial and Metropolitan Examinations, for instance, are comprised of three sections, each taking up the entire day. As to test subjects, the first section contained three questions based on the Four Books (Sishu) and the composition of a rhymed poem with five characters per line. On the second day, the candidates were asked five questions drawing on the Five Classics (Wujing). All essay questions should be answered in the form of Eight-legged essay (baguwen), a prescribed form of rhetorical sequence and organized elaboration. On the third day, the candidates were to write an argument essay to complete the examination. Subsequently, every test paper was to be sealed and transcribed in vermillion ink by the examination staff to produce a copy devoid of attributable handwriting. When the Provincial, Metropolitan, and Palace Examinations were over, the list of examination staff, test questions, and the list of successful candidates were published, and example essays would go into print. 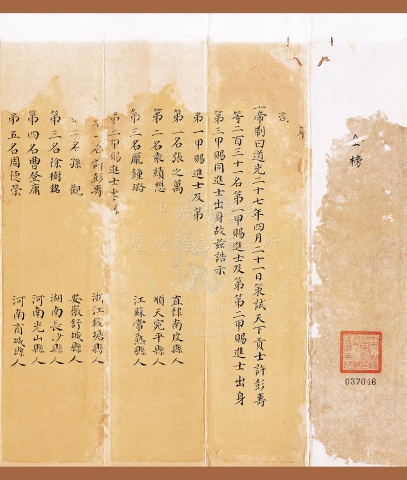 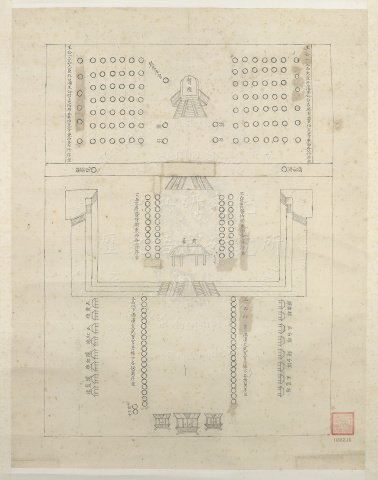 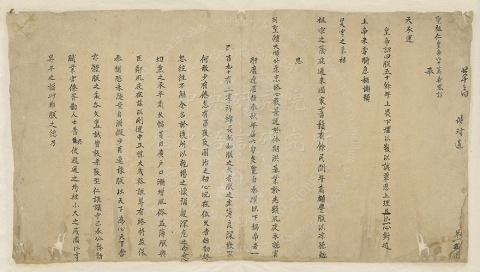 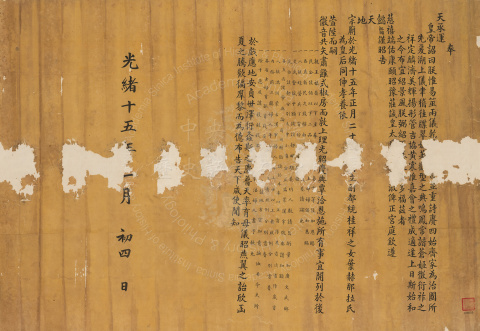 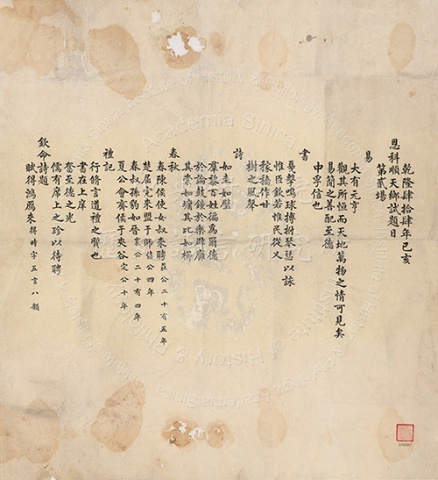 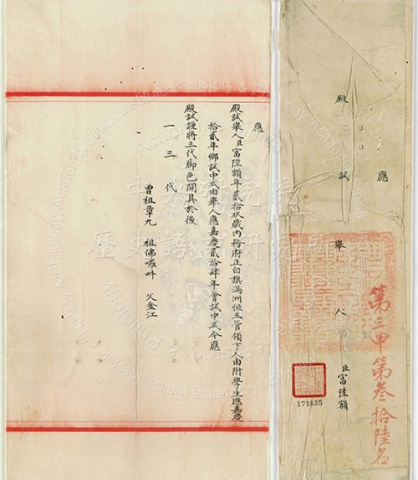 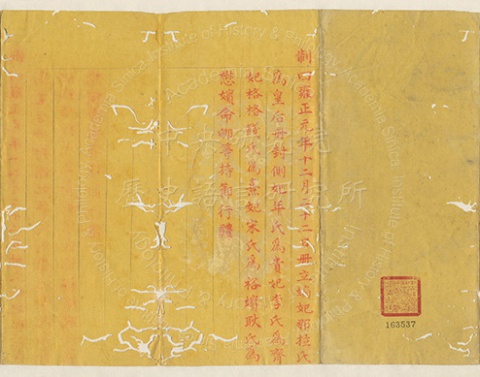